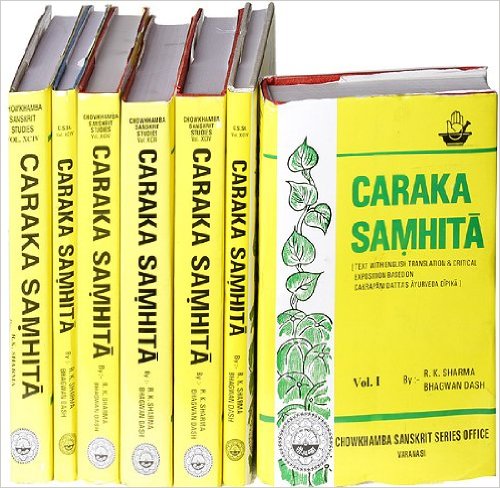 “The Vedas themselves are considered to be Ayurvedic texts in that knowledge of the elements, the human body, doshas, dhatus, and the use of sacred herbs are explored through hymns and poetic references. The Vedas that are richest in references related to health are the Yajur Veda and the Atharva Veda. The Yajur Veda has numerous references to the Gods Vayu, Agni and Soma, which in Ayurveda are related to Vata, Pitta and Kapha, and the elements air, fire and water respectively. The Atharva Veda explores rituals and the use of herbs for the treatment of disease. However, the knowledge of Ayurveda is not well organized or complete in the Vedas. Being poetic, the knowledge is not very clear, especially to modern-day practitioners. Still, within the Vedas are pearls of wisdom and clues that could lead the knowledgeable scholar to new discoveries and deeper insights with great potential for healing. Ayurveda is considered an “upaveda” of the Vedas. An upaveda is a secondary or subsidiary body of knowledge contained within the texts.

The Classical Ayurvedic texts are the location of the greatest amount of organized knowledge on the subject of health and healing. These texts came relatively late, with the oldest of them being written sometime between 1500 and 500 BCE. There are six classical Ayurvedic texts in all. They are broken up into two categories: the Brihat Treya, meaning the three great texts, and the Laghu Treya, meaning the three lesser texts.

The Brihat Treya and the Laghu Treya

The Brihat Treya are the three most important books in Classical Ayurveda and consist of the Caraka Samhita, the Sushruta Samhita and the Ashtanga Hridayam. The word “brihat” means “large or great.” The Laghu Treya are the three supplemental or lesser books and consist of the Ashtanga Samgraha, Madhava Nidanam and the Sarangadhara Samhita. The word “laghu” means “small, light or lesser.” Together, these books make up the most important literature in Classical Ayurvedic medicine.”