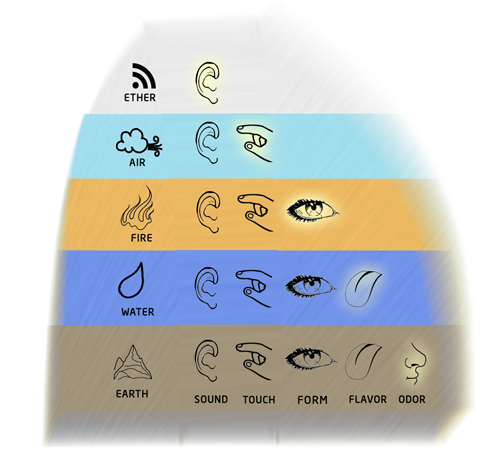 “Sankhya philosophy is one of India’s oldest philosophical systems attempting to address the most important and common questions of life itself. Who are we? Where did we come from? Why are we here? Where are we going? How do we get there? Sankhya philosophy attempts to answer each of these questions through its exploration of cosmology.

Sankhya means “system of enumeration.” It lists the twenty-four tattwas or principles upon which all of creation rests.”

Among these tattwas are the tanmatras, the root energies of the five elements. In the newly revised edition of “Principles of Ayurvedic Medicine,” Dr. Marc Halpern offers additional information about the tanmatras:

“The first building block is actually the “potential” for a building block. These potentials are called tanmatras. They provide the potential for all existence. Tanmatra means “essence” or “potential.” These are the root energies of the five elements. They are the most subtle form of energy and it is only because of the tanmatras that everything comes into creation. This includes the mind, senses, and organs of action. Although the tanmatras are named after their related sensory experiences, their influence is not limited to the senses.

Being so subtle, the tanmatras are difficult to understand at first. Tanmatras are the most subtle form of energy, the root energies of the five elements. They provide the potential for all existence. The following information helps to round out the student’s understanding of the tanmatras. Refer to the section on Sankhya Philosophy for additional information. The following description brings in concepts that are described later in the text. Interested students are encouraged to come back and read this appendix only after reading the rest of the textbook.

The origin of the air element is the tanmatra of touch called sparsha. Sparsha tanmatra is the primordial, unmanifested form of touch. Sparsha is the potential of the touch experience, expressed in its most subtle form. Touch and air are inseparable. Because of their intimate relationship, the skin (through which we receive touch) is considered the associated sense organ of the air element and the hands (through which we reach out and touch the world) are its associated organs of action. Hence, disorders of tactile perception and those of grasping are the result of disturbances in the functions of the air element.