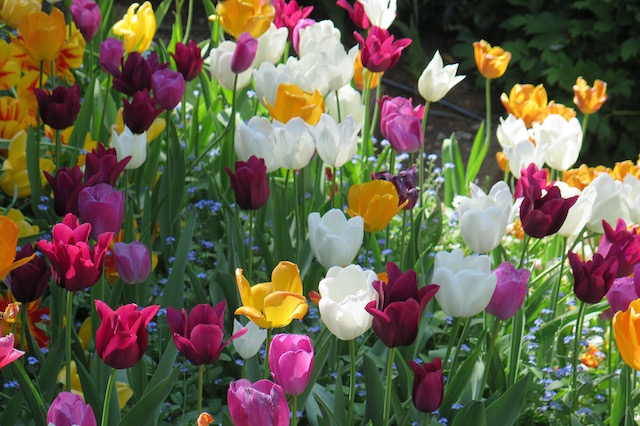 “Seeing beauty in a flower could awaken humans…to the beauty that is an essential part of their own innermost being, their true nature…Without our fully recognizing it, flowers would become for us an expression in form of that which is the most high, most sacred, and ultimately formless within ourselves. Flowers, more fleeting, more ethereal, and more delicate that then plants out of which they emerged, would become like messengers from another realm, like a bridge between the world of physical forms and the formless….Using the word “enlightenment” in a wider sense than the conventionally accepted one, we could look upon flowers as the enlightenment of plants.

…Any life form in any realm…mineral, vegetable, animal, or human – can be said to undergo “enlightenment.”…What could be heavier and more impenetrable than a rock, the densest of all forms? And yet some rocks undergo a change in their molecular structure, turn into crystals, and so become transparent to the light…Most crawling reptilians, the most earthbound of all creatures, have remained unchanged for millions of years. Some, however, grew feathers and wings and turned into birds, thus defying the force of gravity that had held them for so long. They didn’t become better at crawling or walking, but transcended crawling and walking entirely.

…So when you are alert and contemplate a flower, a crystal, or bird…it becomes a window for you into the formless. There is an inner opening, however slight, into the realm of spirit. This is why these three “enlightened” life forms have played such an important part in the evolution of human consciousness since ancient times; why, for example, the jewel in the lotus flower is the central symbol of Buddhism and a white bird, the dove, signifies the Holy Spirit in Christianity. They have been preparing the ground for a more profound shift in planetary consciousness that is destined to take place in the human species. This is the spiritual awakening that we are beginning to witness now.” ~ Eckhardt Tolle, from his book “A New Earth, Awakening to Your Life’s Purpose”