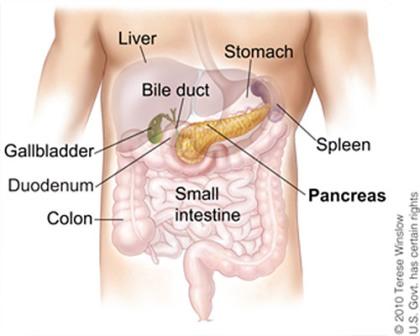 “The pancreas lies between the stomach and the spinal column. While most of the gland is hidden behind the stomach, a portion of it lies close to the duodenum (first portion of the small intestine). The pancreas is both an exocrine and an endocrine gland. The exocrine portion is the part that creates digestive enzymes. These enzymes are secreted into the small intestine via the pancreatic duct which joins the common bile duct which in turn leads into the intestine. The endocrine portion secretes the hormones insulin and glucagon directly into the bloodstream. These hormones regulate blood sugar levels. Insulin lowers blood glucose levels by allowing the glucose to enter into the cells. Glucagon raises blood glucose levels by stimulating the breakdown of glycogen in the liver.

The main diseases of the pancreas are acute pancreatitis, pancreatic cancer and diabetes mellitus. Acute pancreatitis is an inflammatory disease usually secondary to either gallbladder disease or alcohol ingestion. Pancreatic cancer is a rapidly progressing cancer with a very low rate of survival. Diabetes mellitus affects the production of insulin and is discussed in more detail in the chapter on Urinary Diseases.”

Signs and symptoms of disease of the exocrine portion of the pancreas include:

Black and blue markings on the upper, central portion of the anterior abdominal wall.

Excerpt from “Textbook of Clinical Ayurvedic Medicine,” by Dr. Marc Halpern, Founder of the California College of Ayurveda