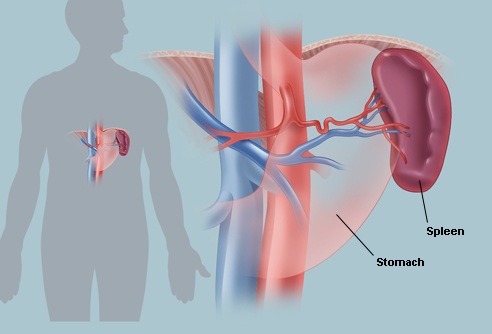 “The spleen is a part of the lymphatic system. The normal spleen is 11 centimeters in length located in the upper left portion of the abdomen hidden under the rib cage. The functions of the spleen are poorly understood. It is known that the spleen plays a role in the demise of red blood cells as they squeeze through the spleen’s tiny pores. This releases hemoglobin into the blood.

The spleen also has a definite immune function as large quantities of lymphocytes (white blood cells) congregate there, similar to a lymph gland. These lymphocytes play a role in creating immunity to toxins and bacteria.

The spleen is better known for its part in other diseases than for its functions. As the spleen becomes engaged in the immune process, often as a part of fighting off viral infections, it becomes quite large and peaks out from under the rib cage. Enlargement of the spleen is called “splenomegally.” An enlarged spleen is in danger of rupturing and this leads to significant internal bleeding. The most common disease leading to an enlarged spleen is mononucleosis. However, the spleen can become enlarged during any infection, most particularly any viral infection such as viral hepatitis. Several cancers also lead to splenomegally. The most common cancer affecting the spleen is lymphoma. This is a cancer of the white blood cells that can have its origin in the spleen, lymph nodes or bone marrow. The spleen has long been considered by the scientific community to be of little importance.

The signs and symptoms of diseases of the spleen are vague. The normal spleen is not palpable. The enlarged spleen becomes palpable below the rib cage on the left side.

Ayurveda teaches that the spleen (Sanskrit: pliho), being located in the pitta region of the body, is a pitta organ. Rather than having an action on the digestive system, its main actions are in the fighting of infections and the digestion of pathogens in the body. As an organ whose activity is protective and closely related to the immune system, the spleen can also be considered an organ of kapha nature.”

~ Excerpt from “Textbook of Clinical Ayurvedic Medicine,” by Dr. Marc Halpern, Founder of the California College of Ayurveda