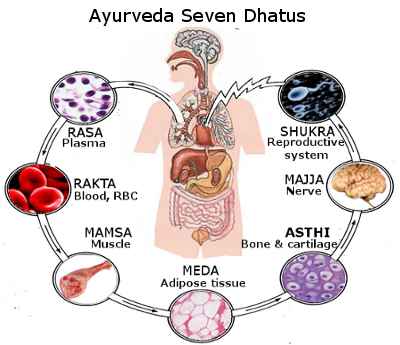 “Dhatu means tissue. The seven dhatus are the seven types of tissue that make up the human body. Since Ayurveda considers both a physical and a subtle body, the seven dhatus make up both of these bodies. The seven dhatus are rasa, rakta, mamsa, medas, asthi, majja and shukra.
The health of the seven dhatus is paramount to the health of a person. When the seven dhatus are functioning normally, they allow the body to express the will of the ego and/or the soul. Pathology of the dhatus results in either an excess or deficiency of tissue. This results in symptoms.
Dhatus are passive tissues in the sense that they respond to the state of the doshas. Doshas, when out of balance, are the causative agent of disease. A dhatu becomes either deficient or excessive when a dosha invades the tissue. Hence, it could be stated that the dhatu is the site of the disease and the dosha is the cause.
When vata enters a tissue, the tissue becomes lighter. Hence, it becomes deficient. When kapha enters a tissue, the tissue becomes heavier and hence excessive. When pitta enters a tissue, the tissue becomes overheated and burns up. In the long term, this results in a lightening of the tissue and deficiency. However, in the short term it simply heats the tissue and causes inflammation.” ~ Excerpt from “Principles of Ayurvedic Medicine,” by Dr. Marc Halpern, Founder of the California College of Ayurveda