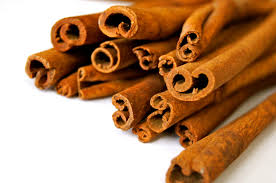 When you think of cinnamon, what comes to mind? Delicious, aromatic tea? Cookies and pastries? Oatmeal? All of these are made so much better by this amazing spice! And yet cinnamon has even more benefits to offer…

Cinnamon comes from the bark of the cinnamon tree, and is a major digestive spice. Those of you who follow these posts regularly know the extreme importance of healthy, balanced digestion. And cinnamon is a great choice for keeping the digestive fires burning in a healthy manner. According to Sebastian Pole in his book Ayurvedic Medicine, “As a bark protects a tree, cinnamon protects and strengthens the intestines”!

Cinnamon is also great for strengthening circulation. It’s a diaphoretic (promotes sweating) and expectorant, making it good for colds and flus. It’s used as a pain reliever for toothache and muscle tension. It also nourishes the reproductive system – but use with caution during pregnancy as it is a uterine stimulant.

Overall, cinnamon is a great spice for warming you up and bringing some spark to your digestion during the cool winter months, making it perfect for vata and kapha doshas (but pitta be careful; it may be too heating for you!)