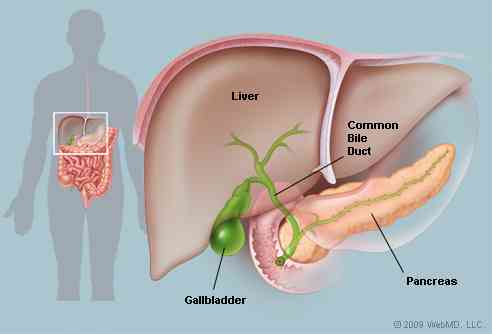 Many of us have never studied human anatomy and physiology. Knowing one’s own body is vital to knowing how to keep it healthy and functioning optimally, not to mention knowing what steps to take when you become ill. The gall bladder is an often misunderstood organ. The below is an excerpt regarding the gall bladder from the textbook, “Clinical Ayurvedic Medicine,” by Dr. Marc Halpern.

THE ROLE OF THE GALLBLADDER

The gallbladder is located in the right upper quadrant of the abdomen and lies in a small groove of the liver.

The gallbladder stores a green fluid known as bile which is produced by the liver. It secretes bile into the cystic duct which then combines with the common hepatic duct to form the common bile duct. The common bile duct then joins the pancreatic duct and enters the small intestine. Bile is secreted after the ingestion of fats and, to a smaller extent, after the ingestion of any food. Bile aids in the breakdown of fat into small globules (emulsification) but does not digest the fat. Bile also aids the absorption of some nutrients such as fatty acids, cholesterol and monoglycerides. Without bile, 40% of fats in the diet would be lost in the stools and cause nutritional deficiencies. Some bile is reabsorbed by the body. The remaining bile is excreted and gives color to the stools.

Signs and symptoms of gallbladder dysfunction include:

Ayurvedic theory teaches that the gallbladder is an extension of the liver. As a storage site of bile, the gallbladder is a pitta organ playing an important role in the digestive process. As gallstones obstruct the flow of bile, pitta bile can not effectively digest kapha fats. As a result, kapha builds up in the digestive system resulting in pale, fatty stools. This can also occur any time that fat and oil intake exceeds the body’s ability to digest it. As kapha builds up in the digestive system, it can block the downward flow of apana vayu. This increases the upward flow of vata (udana) and results in belching.

“Textbook of Clinical Ayurvedic Medicine,” by Dr. Marc Halpern, Founder of the California College of Ayurveda