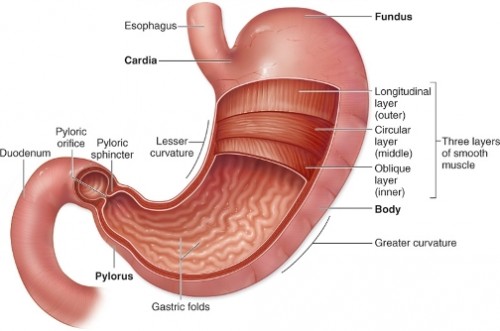 As we begin the New Year, many of us have New Year’s resolutions that involve being healthy ~ and for many of us, losing weight. In order to truly be healthy and achieve optimal weight, it is important to have an understanding of the human body – a topic that many of us were never taught in school (or perhaps we were taught but could use a refresher!) In our ongoing series on Ayurveda and the Human Body, let’s follow the process of digestion of food. According to Ayurveda, proper digestion is fundamental to optimal health.

Digestion begins in the mouth with chewing food. It is important to chew the food well. Contained within saliva are enzymes which begin the process of digesting carbohydrates. Upon swallowing the food, it travels down the esophagus, and arrives in the stomach.

According to Dr. Marc Halpern in “Textbook of Clinical Ayurvedic Medicine”:

The important stomach secretions include pepsinogen which turns into pepsin in the highly acidic environment of the stomach. Pepsin aids in the digestion of proteins. The cells lining the stomach, known as parietal cells, secrete a chemical substance called “intrinsic factor.” This chemical is necessary for Vitamin B12 absorption later in the small intestine. Another secretion of the stomach is the hormone gastrin. Gastrin loosens the valve between the small and large intestine allowing food to flow from one part to the other. Some substances are absorbed directly through the stomach including some water, caffeine and aspirin.

Common important diseases of the stomach include gastritis, dyspepsia, ulcers and gastroesophageal reflux disease (GERD). Less common is the more serious disease of stomach cancer. Gastritis is a condition of stomach inflammation. Dyspepsia is a general term for indigestion with belching, bloating and nausea possibly due to stress and a poor diet. Gastroesophageal reflux disease (GERD) is a condition of regurgitation of food and acid into the esophagus. An ulcer is a wound into the wall of the stomach caused by a combination of factors such as excessive acid production and a loss of wall protection leading to a localized bacterial infection.

Common signs and symptoms of stomach disease are as follows:

According to Ayurvedic theory, the stomach (Sanskrit: amasaya; stomach or receptacle of ama) is both a site of pitta and kapha. The upper half of the stomach is the primary site of kapha dosha and specifically kledaka kapha. Here kledaka kapha produces mucous and alkaline secretions that protect the entire lining of the stomach from fiery pitta hydrochloric acid. Kledaka kapha is increased by eating heavy, oily substances and excess food in general. As kledaka kapha increases, alkaline secretions dominate the balance of acid (fire) vs. protection (water). Agni (fire) is unable to digest the heavy quality of the food. Common symptoms include nausea, loss of appetite, fullness and sluggish digestion.

The lower half of the stomach is a part of the pitta region of the body and is the site of pachaka pitta. Hydrochloric acid, secreted in the stomach, is the corollary of pachaka pitta at this location. Pachaka pitta increases due to the intake of hot, spicy foods, especially when they are deep fried. The intake of hot, spicy foods increases the acid secretions of the stomach, tipping the balance of acid and protection in favor of the acid. This contributes to burning indigestion known as hyperacidity and gastritis while setting the stage for the infection that results in gastric ulcers.

Pitta-type stress, such as intensity, has a combined effect of increasing acid secretion and decreasing mucous secretion.

Vata-type stress, such as anxiety, also decreases mucous production. Thus both vata and pitta types of stress result in decreased kapha and the subsequent protection it offers against acid secretions. This also contributes to hyperacidity and gastritis and sets the stage for the infection that result in gastric ulcers.

Excerpt from “Textbook of Clinical Ayurvedic Medicine,” by Dr. Marc Halpern, Founder of the California College of Ayurveda