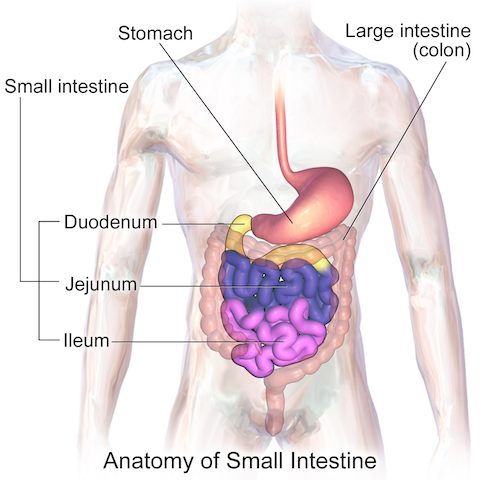 Gluten Sensitivity & Other Diseases and Conditions of the Small Intestine

As part of our ongoing series on the human body, we turn our attention now to the small intestine. How much do you know about it? Did you realize that 90% of digestion and absorption of food occurs in the small intestine, with the other 10% taking place in the stomach and large intestine? The small intestines have a very important job: to make sure that we absorb nutrients and minerals from the foods we eat.

In our last Anatomy & Physiology post, we discussed chewing and swallowing as the beginning point of digestion. Following this, food travels down the esophagus to the stomach…

THE ROLE OF THE SMALL INTESTINE

Food leaves the stomach and enters into the small intestine. The small intestine is a long convoluted tube that, if stretched out, averages about 6 meters (20 feet) in length. It fills the central portion of the abdominal cavity and ends at the ileocecal valve leading into the large intestine. The small intestine is divided into three portions: the duodenum, the jejunum and the ileum. The duodenum is the first 25cm of the small intestine and is the location where bile and pancreatic enzymes enter via the common bile duct. The jejunum and ileum are much longer sections of nearly 2.5 and 3.5 meters respectively. The wall of the small intestine is covered with tiny lacteals and villi. A lacteal absorbs liquid into the lymphatic system. Villi are tiny folds which increase the surface area of the intestine. Each fold is covered with even tinier microvilli, further increasing the surface area. The villi are very rich in capillaries bringing the circulatory system into close contact with the intestinal contents allowing for the maximum absorption of nutrient molecules.

Crohn’s disease is a genetically based, autoimmune, inflammatory disease of the small and large intestine. Celiac disease is a genetically based, inflammatory condition of the small intestine caused by a sensitivity to wheat protein which leads to nutrient malabsorption. It is also called gluten sensitivity or intolerance and can range from mild to severe. In severe cases, children may experience failure to thrive. Parasitic infections include tape worms and giardia (protozoa) along with other less common pathogens. These organisms make their home in the intestines interfering with digestion and absorption. An inguinal hernia is a condition where the intestines extrude through the abdominal wall in the area of the groin. This condition is 25 times more common in men due to the increased size of the inguinal canal which allows for the descent of the testes from the abdomen to the scrotum during fetal life. This condition is easily corrected with surgery.

Ayurvedic theory teaches that the small intestine (Sanskrit: grahani: “retrainer” of undigested food), along with the lower portion of the stomach, is the home of the pitta dosha and the subdosha pachaka pitta. Pitta is the container of agni. The intake of hot, spicy foods increases agni and pitta dosha. This causes heat to build up in the small intestine. As this occurs, enzyme secretions increase resulting in burning indigestion and possible duodenal ulcers. In addition, as heat rises in the small intestine, diarrhea occurs as a mechanism to release the heat. Inflammatory bowel disease occurs when there is a buildup of excess heat beyond the body’s ability to release it.

The small intestine is also the home site of samana vayu. This aspect of the vata dosha has two main functions. One is to regulate agni in much the same way as wind or air affects fire. The second function of samana vayu is the absorption of nutrients. The effectiveness of samana vayu is disturbed by stress and irregular routines, which cause it to become unstable. This results in disturbances to agni and impaired absorption. As agni becomes variable, the quality of digestion decreases. Poor digestion results in poorly digested food particles entering into the large intestine. Once in the large intestine, it is acted on by bacteria producing excessive amounts of gas and bloating. As gas builds up pressure against the walls of the intestines, udana vayu causes the muscles in that area to contract in an effect to contain the gas. This results in cramping.