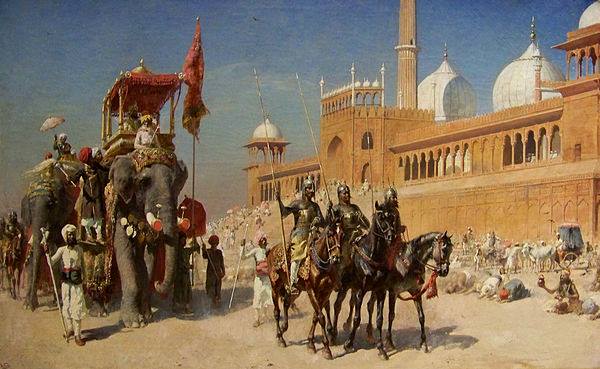 “India was not a country in the modern sense until 1947. Prior to that, sections of India were ruled by various kings and authoritarian leaders, some indigenous and some foreign. Invasion and defense was a pattern of life when looked at over centuries and millennia, in which different rulers established systems of religion, conduct, education and systems of healing.

What is most often referred to as the occupation of India takes place around 1200 CE when the Muslims invaded India. This was after gradual intrusions that began as early as 700 CE. The origin of the Muslim invaders was somewhere near Turkey and Afghanistan. Over the next 700 years power would continually shift with additional invasions and various leaders taking control of different regions. Between approximately 1500 and 1850, most of India was ruled by, and a part of, the Mughal Empire formed by descendants of Gengis Khan, who originated near modern-day Uzbekistan.

During the Muslim / Mughal period, Muslim culture and medicine entered the Indian way of life and Ayurveda began to decline. The Muslim / Mughal invaders went on anti-Buddhist and anti-Hindu crusades resulting in a great loss of Indian culture and writings. This marked the beginning of merging Muslim/Arabian medicine with Ayurveda. The result was Unani medicine. Unani medicine is an amalgamation of Ayurvedic medicine, Arabian medicine and Greek medicine originating with the Muslim people. The first schools of Unani medicine began to operate in India around 1200 CE. Unani medicine is still taught and practiced in India today. About 1500 CE, the Europeans began to show interest in the region of India as a trade zone. Both the British and the French vied for power and began to meddle in the politics of the region supporting different tribes / rulers in their internal conflicts in the hopes of gaining influence and trade. The British and the French essentially fought a war with each other in India with the British being victorious and gaining control over the entire region by 1850 (India, Pakistan and Bangladesh), replacing Mughal rule with their own. They also established British culture including British medicine, as they closed all remaining centers of Ayurvedic education and outlawed its practice.”