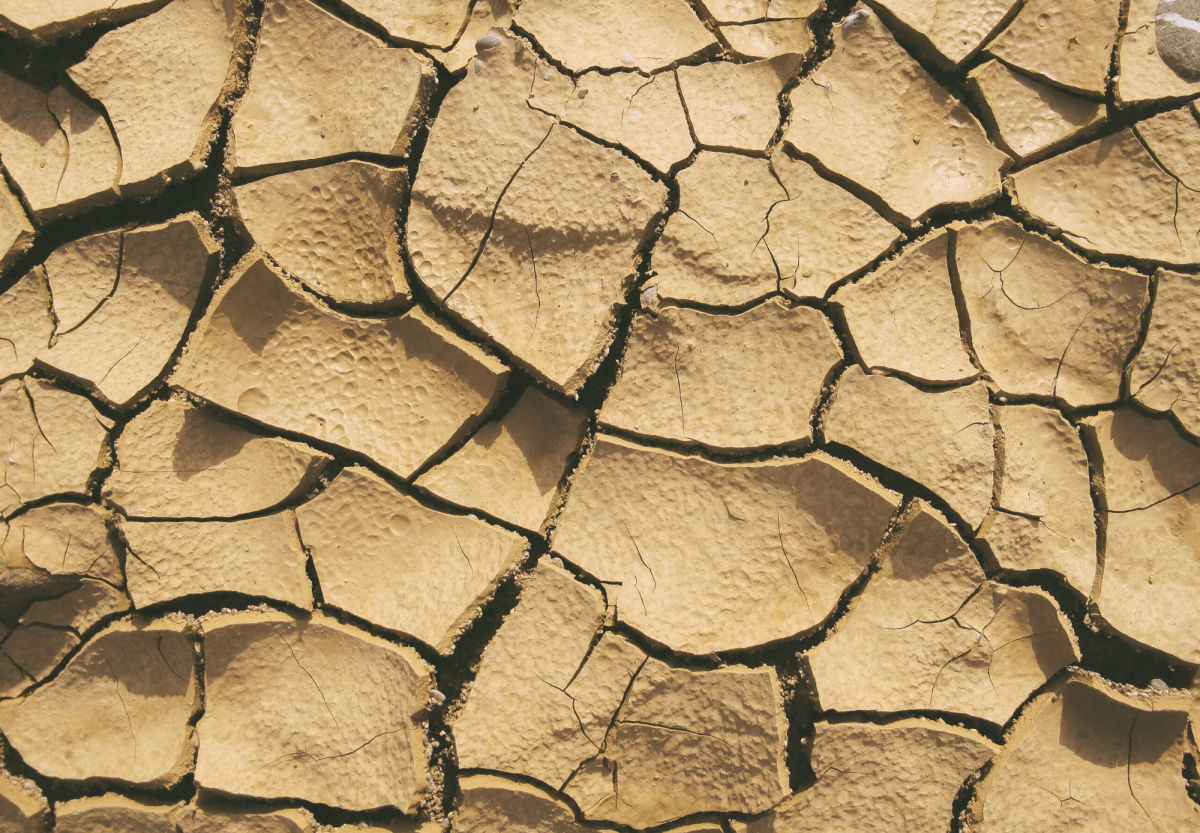 The element earth, called “prithvi” in Sanskrit, is the fifth of the five great elements (pancha mahabhutus). It comes fifth because it evolves out of each of the other four elements (ether, air, fire and water), containing the essence of these elements within it. Ether provides earth the space to exist within. Air provides earth with subtle movements seen on a subatomic level. Fire (energy) is latent within earth, bound by the chemical bonds of nature that hold structure together. Einstein quantified the relationship as E=MC2. E (energy) represents the fire element. M (mass) represents the earth element. C (Speed of light) represents the air element. Water is also inherent within earth. Water is the bridge between the gaseous state of mater and the solid state. As matter becomes denser, gas (air, ether and fire) coalesce into water (fluidic matter). The process of densification continues until matter becomes solid. Earth is the elemental representative of the solid nature of matter.

The Earth element represents solid matter and the structure of the universe. Earth gives form to the human body, and to all of creation. The structure provided by earth is the conduit through which the other elements flow. All elements are born of ether and contained within earth.

The nose is the vehicle through which the gandha tanmatra manifests. Through the nose we take in the scents of creation. These impressions enter the body, mind and consciousness deeply affecting us physically and emotionally. The rectum is the organ of action. Through consumption and defecation, the balance earth element in the body is regulated. If too much earth is released, as occurs in diarrhea, body structure weakens. If too little earth is released, as occurs in constipation, the body remains strong for a while but becomes more and more toxic. Because the earth element and smell are intimately connected, both diarrhea and constipation negatively impact the ability to smell. Excess earth element can obstruct the sense of smell while deficient earth element can weaken the structures responsible for smell. Thus, healthy elimination is essential to the balance of the earth element, the sense of smell and the over-all well-being of the body.

To know any element is to know its qualities. Earth is cool, stable, heavy, dry, rough, gross, dense, dull, clear, and hard. The earth element is the antidote to symptoms that have the opposite qualities in the body. It is important to take in the qualities of earth when you are feeling too warm, ungrounded, chaotic, emaciated, fluidic, lacking in self-esteem, feeling insignificant, irritable with a sharp tongue, vulnerable, or can’t withstand stress.

The kapha dosha is made up of earth and water. Water with its cool and soothing properties provides the primary protection of the body against the factors of heat (pitta) and movement (vata). Earth provides underlying structure and foundation that allows for the growth and development of tissues. As kapha dosha increases in the body, there is a general increase in both fluid and structure, though one can increase less than or without the other. Increases in the earth element results in a thickening of the structures of the body.

Of the seven dhatus of the body, earth is found in significant quantity in the mass that makes up the mamsa and medas dhatus. It also makes up the solid structural component of the asthi dhatu. These three dhatus are immediately dependent upon a healthy earth element in the body. While the other dhatus do not have large amounts of earth contained with them, they could not hold their form without it. Thus, earth provides the basic structure of the rasa, rakta, majja, and shukra dhatus as well. Therefore, the entire body is dependent upon the earth element for its health and well-being.

Earth enters the body through the foods we consume. While the earth element provides the structure of all food, is found in the largest amounts in grains, nuts, legumes and meats. It is found in moderate amounts in dairy products and in small amounts in fruits, vegetables, and spices. When an excess of the earth element is taken into the body, as occurs with overeating, the tissues of the body are provided with an excess of raw material for building new tissues. Existing structures become larger where an increase in size is possible, and they become both thicker and denser where the potential for longitudinal growth is limited. Excesses of earth that exceed the body’s capacity to convert it into other structures are stored in the body as a part of the medas dhatu (fat). An examination of a patient with large amounts of the earth element in the body reveals thick skin, strong finger nails, large muscles, and coarse, dense hair.

Deficiencies in the earth element in the body result in a weakness of body structures. Lacking in the raw materials to build solid tissues, the bones become weakened and osteoporosis places the bones at risk of fracture. Muscle mass is reduced and body fat decreases. As one function of the earth element is to retain heat, the body’s ability to regulate internal temperature decreases and an individual easily feels cold. Lacking in substance, a person with a deficiency of earth is unable to stand up against the challenges of the world and is easily pushed aside by stronger forces.

Earth is prevalent in the seasons of late winter and early spring. In the late winter, the earth element is most predominant because the environment is dry, static, solid and relatively dormant. Water that has fallen in form of snow is locked up in a solid state and unable to flow. In the early spring, as water begins to flow, the earth element provides the substance that will be utilized to begin building new structures, as evidenced in the budding of trees. During the winter, it is important to make sure that the quantity of earth element is properly proportioned in the diet in accordance with prakruti and vikruti of the patient. In general, due to the seasonal influence, less earth element should be consumed than at other times of the year. However, too little of the earth element in the diet at this time will make it difficult to maintain strength and body temperature. Thus, fasting and strong purification should be avoided during the excessively cold winter months. As the waters begin to flow in the early spring, purification is more optimal. If a great amount of the earth element is taken in excess during the dormancy of the winter, there can be a great increase in body fat.

In the cycle of life and death, earth represents the gestational period inside the womb where the basic structure of the body is formed. During this time, proper maternal nutrition providing the necessary earth element is essential for proper growth and development. A lack of earth element at this time can permanently cripple a child. The earth element continues to play an important role in the development of the child until growth is complete.